How to Use Buck-Boost and Push–Pull Transformers

Buck-boost transformers, which sometimes take the form of push–pull transformers, help adjust AC voltage between equipment and applications. Buck-boost connections usually appear in electrical equipment that operates with fixed amounts of buck or boost, such as uninterruptible power supply (UPS) units for computers. 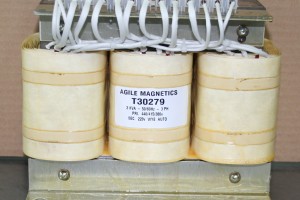 Electricians install these units as isolating transformers. They communicate capacity through nameplate kilovolt ampere (kVA) ratings, which depend on the percent voltage drop or rise during use. For example, buck-boost transformers set to 10% boost will raise supplied voltages of 210 V to 231 V. Transformers set at 10% buck will yield results of 225 V from incoming voltages of 250 V.

Some buck-boost transformer applications, such as half-bridge or full-bridge configurations, use output circuit inductors to reduce output voltage ripples. Systems with more than one output require different inductors for each output. Conversely, installers could also place one inductor in series with the primary center tap of a push–pull center-tap transformer.

In this alignment, the two transistors conduct at the same time to charge the inductor. Charging the current flow through both halves of the primary winding but in opposite directions results in the currents magnetically cancelling each other; therefore, the transformer windings act as shorts to the ground.

Push–pull converters’ efficient design and maximum power densities have made these devices intensely popular for a variety of applications. They assist in many high-power switching transformer applications, improving the efficiency of these systems due to their compact design.

Push–pull and buck-boost transformers differ mainly in the number of transistors employed in each transformer design. Push–pull converters feature pairs of transistors, which reverse the current in the transformers at periodic intervals by switching on and off. In contrast, buck-boost units work with a single transistor that operates in the same way, so they draw current only half the time. Push–pull designs benefit high-power applications because of their ability to operate with greater efficiency while making less noise.

With high-power electronics becoming more and more common, push–pull transformers now see rising demand for their services. These transformers appear in many different fields, including:

Buck-boost and push–pull transformers benefit a wide of utilities at reasonable prices. We offer comprehensive consulting on which products will best fit your application.

If you would like to learn more about our innovative push–pull and buck-boost transformers and how they’ll benefit your application or utility, contact us and request a free quote today.